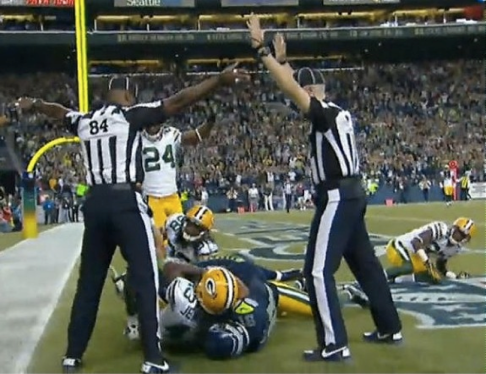 BY TAL LETOURNEAU, LAW I

The first month of law school was characterized by mountains of learning.  I learned, for instance, that I don’t care nearly as much about the NHL lockout as I do about the National Football League Referee Association’s labour strike.

Orientation week was largely devoted to reassuring 1L’s that lawyers and the law are important.  Personally, I needed look no further than Sunday NFL programming to validate this claim.  In a weird sort of American Bolshevik Experiment, a kind of Kafkan mess where the Hunger Games met Mr. Bean, the NFL owners entrusted the interpretation of the rules of their sport to a band of amateurs.  The result was raging, unmitigated anarchy.

For the benefit of readers with fuller lives than myself, who spend their Sundays on things other than football – homework? the outdoors? meaningful relationships with other people? – here’s a very brief breakdown of the circumstances surrounding the NFL referee lockout .

The Referee Association wanted financial security in the form of pensions.  The owners objected to this, not so much because of the money, but as a matter principle.  After all, the owners, notwithstanding their stranglehold on a multibillion dollar industry, don’t have pensions, so why should anyone else?  Furthermore, the refs, in a  desperate, clutching attempt at job security, objected to the NFL’s proposal of creating a standby committee of officials available to facilitate the firing of any ref who should ever make a mistake.  But the absence of real refs doesn’t foreclose the NFL’s ability to absorb the money that fans and sponsors are intent on pouring into its pockets, so the Replacement Refs – aka the ‘scabs’ – were brought in to manage the first three weeks of action.

So who were these replacement refs?  That’s a great question, and a potential source of much scholarly debate, but from what I’ve been able to glean they apparently ranged from substitute teachers to chemical engineers to realtors.  The only things they all seemed to share were a decided lack of Ed Hochuli’s muscle tone and gross underqualification.

After one weekend of play, the general media consensus was that the refereeing wasn’t so bad, but in Week Two things quickly escalated from not so bad to very so bad.  Commentators could no longer resist the ‘compromising the integrity of the game’ discussion.  I’m always a little dubious of this phrase, mostly because I think the word ‘integrity’ should be used sparingly in the context of a game responsible for – among other monstrosities – bounty programs, Peyton Manning commercials, those cheese-hats that Packers fans wear, the Super Bowl half-time show, the mythologizing of rapists and dog-killers, sac dances, Ochocinco’s twitter feed, and Tom Brady converting on third and long… but yes, in essence I agree that in the absence of the real refs, something was certainly amiss.  I prefer to call it justice.

Under the replacement regime corruption ran rampant, like an unblocked blitzing cornerback.  Coaches strong-armed referees into sending the next call their way.  The replacements almost visibly crumbled under boos and jeers from hometown crowds.  Teams were penalized with no indication of which player had actually committed the offense.  Scrums broke out across the field like ninth grade acne.  The Patriots lost back-to-back games.  Brian Stropolo, a New Orleans resident whose Facebook page displays several pictures of himself decked out head to foot in New Orleans Saints gear, was scheduled to officiate a New Orleans Saints game up until a few hours before kickoff.  Finger-pointing reached epidemic proportions.  The fallout of these shenanigans was that games were taking four hours to be played.

But on roared the revenue stream.  So what if the media were mad?  So what if the players were enraged?  And sure, maybe the odd Detroit fan was compelled to throw his microwave off the balcony; he’d still be watching the Lions with a case of Bud Light next Sunday, because the entertainment value was unparalleled.  I was stapled to the tube, just dying to know what those scabs were going to pull next.   I guess, like Heath Ledger’s Joker in The Dark Night, “some people just want to watch the world burn”.

At the end of Week Three, when, on primetime national television, the replacements made what has already been labeled by many as the ‘worst call ever’, the tipping point was finally reached.  In the instantly infamous Monday night game between Seattle and Green Bay, the replacement refs finally blew a call that clearly and directly gave the wrong team the win.  The farce was exposed.  Players left the field before the game was officially over.  Twitter exploded.  Packers fans ate entire wheels of comfort cheese.  A serious chunk of gambling money – one of the more brazen estimates put the figure at a quarter billion dollars – exchanged hands in the wrong direction.  The NFL now had a serious PR issue.  Three nights later the real refs were back on the field.

What I find most interesting in all this is that all it took for simmering amusement to boil into outrage was for them to actually get it wrong.  The NFL is by no means a perfect little world.  The perils surrounding player safety grow yearly, and the ‘integrity of the game’ is just guff.  Still, when the wrong team went home with a win they didn’t earn, there was an overwhelming sense of injustice.

Football is its own little society with its own set of rules, and its citizens look to those rules for the same reasons we look to the law: for security (physical and financial); to punish bad behaviour; to provide predictability; basically, to reward our faith in it by simply getting it right.  But the law, in football, only goes as far as the ability of those whose job it is to understand and interpret it.  The NFL tried to underwrite the role of justice in their league, and it backfired.  They fought the law, and the law won.  But I’m still going to miss those scabs.

One thought on “The Lawlessness of NFL Referees”